MESSAGE RELEASED FROM THE CPT (Pastoral Land Commission) CEARÁ ON THE RISING TO NEW LIFE OF Sister Clarice Garvey.

BLESSINGS ON YOUR JOURNEY.

On April 1, in Toronto Canada, our beloved Sr. Clarice Garvey, OLM who was instrumental in organizing the CPT Team in the Archdiocese of Fortaleza, Ceará made her final journey to New Life.

In 1964, a group of sisters from the Congregation “Our Lady’s Missionaries” arrived in the Archdiocese of Fortaleza with the mission of working at the “Maternidade Escola Assis Chateaubriand – MEAC – UFC.”(Maternity Institute of the Federal University of Ceara). When they felt they had completed their mission, which was to train nursing staff in that hospital unit for several years, they settled in Planalto do Pici. The sisters engaged themselves in various ministries for social justice in the neighbourhood where they lived. At this point they received an invitation from Parish Priests, José Maria and Moacir Cordeiro, to work in the parishes of Aratuba, Palmácia and Mulungu.

Raimundão, a member of the CPT Team, gives us his testimony:

“We faced a great struggle to obtain land reform on the Bu farm in Palmacia. After more than four years of struggle and resistance for this land, we were still homeless, evicted from the land we had been tilling.  The sisters, Clarice, Elizabeth and Paulina were very supportive of us.  They welcomed us and helped us in every way they could. We started to fight again for a different piece of land, this time in the municipality of Ocara, in the town of Novas Vidas.  Sister Clarice was one of the first people to enter this land on our side, always supporting our struggle. Today we have about 15 settlements in this region of Fortaleza, the fruit of our struggle and work.  And we continue counting on the support of Sister Clarice. “

Luizinha Camurça, a historical figure of CPT Ceará who was a political detainee, tortured before finally being released, testifies:

“To speak about Sister Clarice is to talk about a great journey and many years of dedication and commitment in her work at Fortaleza’s CPT and also of the commitment of the sisters, especially Sr. Elizabeth (Maejanet Mac Donell) and Sister Clarice in their support for the workers in the struggle for social and land reform.  This included the organizing of communal farms, the struggle for a dignified life for peasant families, the celebration of spirituality, and support for faith and discipleship. At CPT we formed a large family together with the people. In the year 2000, Sister Clarice secured financial resources from the SHARE Foundation to support organic farming.  Over 19 years the Northeastern Producers met with their support, committing themselves to practicing agro-ecology (Organic Farming) in their activities, and meeting for the exchange of experiences at the northeastern level. This was a seed that she planted and has already produced much fruit.”

The Pastoral Land Commission of Ceará recognizes the great work and support of Sister Clarice, together with the peasant farmers, in the area of ​​the Archdiocese of Fortaleza, especially in the support and formation of leadership that continues the work to date. She intercedes with God for us, the CPT workers and our mission, and for all the workers in the struggle for land. CPT Ceará echoes the words of the poet Zé Vicente: “Go, my dear Clarice, to the rest of the just.” 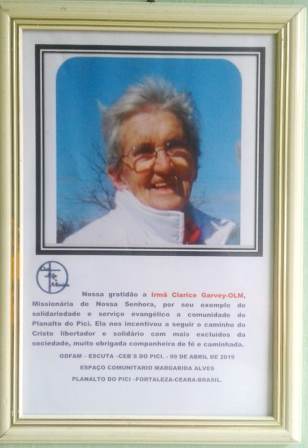 2 thoughts on “The Pastoral Land Commission of Ceará recognizes the great work and support of Sister Clarice Garvey, OLM”