“Land Issue Come Visit to Learn,” read the sign in front of the logs and brush blocking one of the entrances to Awenda Provincial Park.  We passed it on our way to our cottage outside Penetanguishene.
A few days later, Sr. Lorie and I decided it was time to walk over for our “class.”  We discovered we had much to learn. 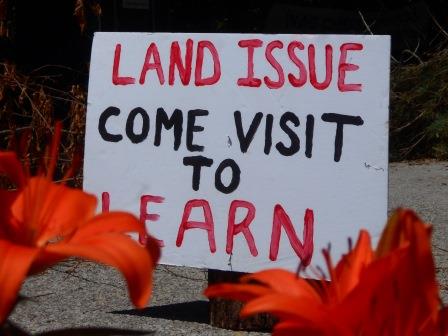 John Hawke of Chimnissing Anishinabek (also known as Brousoleil First Nation on Christian Island) has been living in a cabin on land claimed by Awenda Park for eight years.  He decided to erect the barricade so those who share use of this land could gain awareness of its history, current situation, and dreams for its use in the future.

He spoke with us of different treaties and what each one meant.  He also mentioned his opposition to agreements made by INAC (Indigenous and Northern Affairs Canada), a group that many indigenous people feel doesn’t represent them, wanting instead to reclaim the traditional system of grandmother leadership.
John Hawke is leading a men’s group for healing and learning how to live the traditional ways.  He works closely with a group of grandmothers led by Elizabeth Elson of the same community.  He believes that it is possible to find ways to share use of the land currently claimed by Awenda Park.
Surely, spending time living more closely with the natural world would be healing and reconciling for all of us.
For more information:
https://www.facebook.com/groups/388413234531990/?multi_permalinks=3047963655243588&notif_id=1563203611811200&notif_t=group_highlights
https://globalnews.ca/news/5456436/beausoleil-first-nation-man-indigenous-rights-awenda-park/